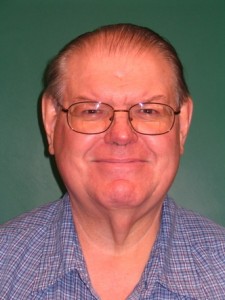 John Bruce Ferguson passed away on December 11 2007 at age 59. He had been ill for the last 18 months. Health problems forced John to retire in the middle of the Spring 2007 semester.

John started as a Chemistry major at SDSU in the Fall of 1966. During his junior year he changed his major to Chemical Physics after getting heavily involved in the design of a fast pulse logic system for Dr. Don Cottrell’s High Energy Physics Laboratory. He received his MS in Physics working with Dr. Richard Morris.

After working several years for a local electronics company, John received a call for help from the Physics Department. Dr. Jerry Solomon was hired away by the Jet Propulsion Laboratory, creating a hole in the Department’s Scientific Instrumentation Program. John was asked to take a “temporary” teaching position until Dr. Solomon, hopefully returned. Well, he did not return and a “temporary” appointment became a career.  John was very well respected for his abilities, hard work and willingness to solve problems. He became a master of large class sections, with a level of organization and preparation that was something to behold. Over the years, many thousands of students either attended his classes or were instructed using his laboratory manuals.

John was exceptionally well-read in military history.  Ask him the difference between Wildcat and Hellcat fighters and he could tell you in great detail.  John was a unique individual. He was resolute, with a matchless determination to provide instruction of the highest quality. In the end, “John was John.”

Obituary written by Gordon Shackelford, a friend of John’s for over 40 years.

I was first introduced to John by Joch Templin who said that he had two really bright students (John Ferguson & Gordon Shackelford) in his big physics section, who he said “could push my cosmic ray muon experiment forward”. The experiment failed for very fundamental reasons, but John and Gordon were outstanding in the laboratory and extraordinarily good people to work with.

John was someone with whom I regularly enjoyed a political joust. Our political views were not orthogonal but then hardly parallel either. His knowledge of politics and political and military history made a discussion times from Alexander to WW II a joy. He knew, for example, just what Marcus Agrippa built where and using what engineering techniques. His stimulating discussions about physics, history and science fiction will be sorely missed.

I thought I would pass on little known information about John’s thesis work. John constructed a laser regulator that was simple to operate and enabled a 5 mode laser to be reduced to one mode with little loss in output. Its stability was such that it varied by no more than a Mhz over an extended period of time. A physicist at Berkeley read about his success and came down to SDSU and picked our brains. When the physicist asked if we were going to commercialize the regulated laser, everybody was more interested in pursuing their research. So the physicist went back home, patented the idea and started building them to sell. The price tag on each was $5000. The physicist did return to San Diego one more time to use some of the diagnostics we had and I asked him how his marketing was going. He said at that time he was busy filling 40 orders. I think it indicates that John was more interested in learning new things than he was in making lots of money.

The John B. Ferguson Fund

In John’s memory, the Department has established the John B. Ferguson Fund. The objective of the fund is provide grants to upper division Physics majors to pay for their textbooks. The high cost of textbooks always was a concern to John. Wherever practical, he wrote texts and laboratory manuals that were printed by the Book Store saving students substantially. The John B. Ferguson Fund will provide a lasting memory of John while helping students.

Memorial Contributions can also be sent directly to:

Checks should be written to Department of Physics, SDSU.