The physics department maintains a SDSU physics alumni email list “phys-alumni” (you can subscribe to it yourself, or just email us). All alumni are also invited to keep in touch with us through the “From Quarks to Quasars” Departmental Newsletter*. To receive a free hard copy, additionally email your postal address to the office. Facebook has a “SDSU Physics Alumni” group.

The main SDSU-wide Alumni site at http://www.sdsualumni.org/ is where you can also keep your contact details updated!

Two of our notable Alumni

Dr. Day is the CEO, CTO and Chairman of Daylight Solutions. Previously, he was the CTO and Senior VP of New Focus an optics startup he cofounded in 1990. He received his B.S. and M.S. Physics at SDSU with honors and went on to get his Ph.D. at Stanford. His Ph.D. thesis focused on frequency stabilized, solid-state lasers and as a part of his doctoral work, Dr. Day was the first to achieve relative stability with diode-pumped solid-state lasers at the sub-hertz level. Dr. Day also made several advances in the theory of coherent optical communications as affected by diode-pumped solid-state lasers. He was awarded the 2006 College of Sciences Monty award. 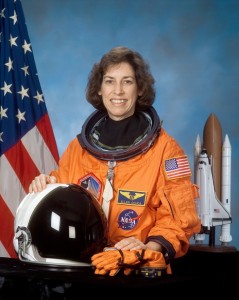 Dr. Ochoa became a NASA astronaut in 1991, and flew on four missions including the first docking mission with the International Space Station, in which she coordinated the transfer of supplies and also operated the RMS (Remote Manipulator System) during an 8-hour space walk. She was the first U.S. Hispanic in space, and last flew in 2002 onboard Shuttle Atlantis. Dr. Ochoa received her BS Physics at SDSU in 1980 and both the MS, Ph.D in EE at Stanford University. She was the 1995 SDSU Alumna of the year. As Chief of the Intelligent Systems Technology Branch at Ames, she supervised 35 engineers and scientists in the research and development of computational systems for aerospace missions. She is currently  Deputy Director of the Johnson Space Center.

*Newsletter: From Quarks to Quasars is published semi-regularly and sent to all alumni and supporters of the Department of Physics. To receive your free copy email the office.